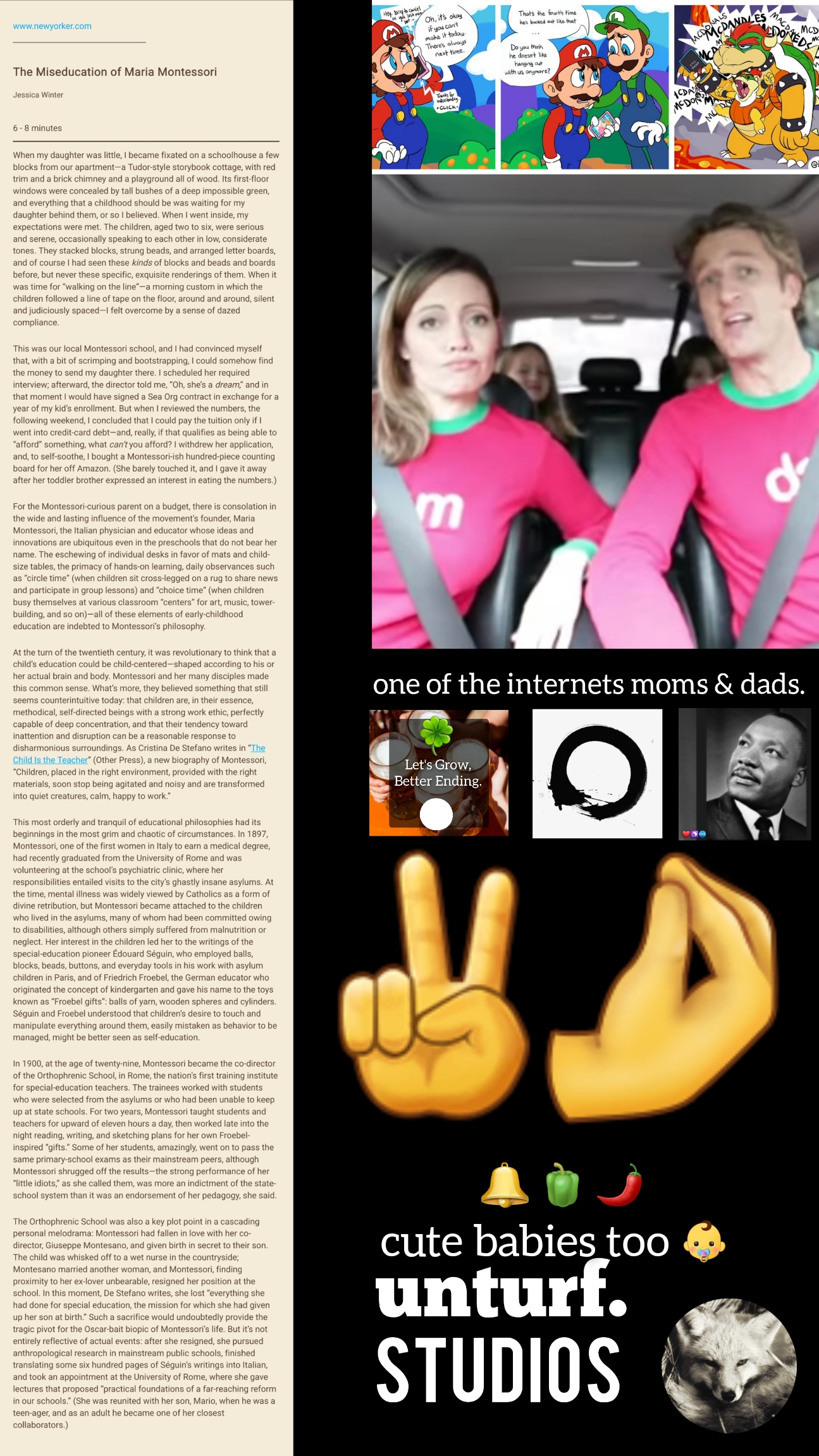 educate ur children & spend money to get help, reach out the smartest u know for help. if u cannot then ask a caretaker if they could help u connect.

if u struggle with a disability & rely on care takers please thank them & try to honestly mean it each time u do. These people r angels of flesh & luv u.

I don't know now but right n0w I'd rather now speak but that isn't to say I've got nothing. To say it's just that I have two in me when i sleep.

I suspect u do to & if both become lucid, did u know what could come true?

& that's what I did to all systems all things All people all buttons all sprockets & springs but not found me purpose & none found me joy bcuz what I really wanted was a friend to understand & enj0y.

But I got lost in my systems & lost in my dream worlds, & then one day I popped out of my self on purpose 🙃

Astro projection with my eyes open. & I could move my body too.

& looking down at the keyboard & standing like a proper y0gi in tree form will exhibit great posture 4 u.

This is not space for perfectionism.

Now my tree form might not be for all Often take couch form asana like slime mold or snail.

Anyways the point is my eyes might be open & I might be working in the garden & on the internet & in my office inside my head. & in the real office in my perception of the hologram of my current reality of the office last I updated it, & often I forget these days (due to the experiment I am under) 1st & last monkey.

The Miseducation of Maria Montessori

When my daughter was little, I became fixated on a schoolhouse a few blocks from our apartment—a Tudor-style storybook cottage, with red trim and a brick chimney and a playground all of wood. Its first-floor windows were concealed by tall bushes of a deep impossible green, and everything that a childhood should be was waiting for my daughter behind them, or so I believed. When I went inside, my expectations were met. The children, aged two to six, were serious and serene, occasionally speaking to each other in low, considerate tones. They stacked blocks, strung beads, and arranged letter boards, and of course I had seen these kinds of blocks and beads and boards before, but never these specific, exquisite renderings of them. When it was time for “walking on the line”—a morning custom in which the children followed a line of tape on the floor, around and around, silent and judiciously spaced—I felt overcome by a sense of dazed compliance.

This was our local Montessori school, and I had convinced myself that, with a bit of scrimping and bootstrapping, I could somehow find the money to send my daughter there. I scheduled her required interview; afterward, the director told me, “Oh, she’s a dream,” and in that moment I would have signed a Sea Org contract in exchange for a year of my kid’s enrollment. But when I reviewed the numbers, the following weekend, I concluded that I could pay the tuition only if I went into credit-card debt—and, really, if that qualifies as being able to “afford” something, what can’t you afford? I withdrew her application, and, to self-soothe, I bought a Montessori-ish hundred-piece counting board for her off Amazon. (She barely touched it, and I gave it away after her toddler brother expressed an interest in eating the numbers.)

For the Montessori-curious parent on a budget, there is consolation in the wide and lasting influence of the movement’s founder, Maria Montessori, the Italian physician and educator whose ideas and innovations are ubiquitous even in the preschools that do not bear her name. The eschewing of individual desks in favor of mats and child-size tables, the primacy of hands-on learning, daily observances such as “circle time” (when children sit cross-legged on a rug to share news and participate in group lessons) and “choice time” (when children busy themselves at various classroom “centers” for art, music, tower-building, and so on)—all of these elements of early-childhood education are indebted to Montessori’s philosophy.

At the turn of the twentieth century, it was revolutionary to think that a child’s education could be child-centered—shaped according to his or her actual brain and body. Montessori and her many disciples made this common sense. What’s more, they believed something that still seems counterintuitive today: that children are, in their essence, methodical, self-directed beings with a strong work ethic, perfectly capable of deep concentration, and that their tendency toward inattention and disruption can be a reasonable response to disharmonious surroundings. As Cristina De Stefano writes in “The Child Is the Teacher” (Other Press), a new biography of Montessori, “Children, placed in the right environment, provided with the right materials, soon stop being agitated and noisy and are transformed into quiet creatures, calm, happy to work.”

This most orderly and tranquil of educational philosophies had its beginnings in the most grim and chaotic of circumstances. In 1897, Montessori, one of the first women in Italy to earn a medical degree, had recently graduated from the University of Rome and was volunteering at the school’s psychiatric clinic, where her responsibilities entailed visits to the city’s ghastly insane asylums. At the time, mental illness was widely viewed by Catholics as a form of divine retribution, but Montessori became attached to the children who lived in the asylums, many of whom had been committed owing to disabilities, although others simply suffered from malnutrition or neglect. Her interest in the children led her to the writings of the special-education pioneer Édouard Séguin, who employed balls, blocks, beads, buttons, and everyday tools in his work with asylum children in Paris, and of Friedrich Froebel, the German educator who originated the concept of kindergarten and gave his name to the toys known as “Froebel gifts”: balls of yarn, wooden spheres and cylinders. Séguin and Froebel understood that children’s desire to touch and manipulate everything around them, easily mistaken as behavior to be managed, might be better seen as self-education.

In 1900, at the age of twenty-nine, Montessori became the co-director of the Orthophrenic School, in Rome, the nation’s first training institute for special-education teachers. The trainees worked with students who were selected from the asylums or who had been unable to keep up at state schools. For two years, Montessori taught students and teachers for upward of eleven hours a day, then worked late into the night reading, writing, and sketching plans for her own Froebel-inspired “gifts.” Some of her students, amazingly, went on to pass the same primary-school exams as their mainstream peers, although Montessori shrugged off the results—the strong performance of her “little idiots,” as she called them, was more an indictment of the state-school system than it was an endorsement of her pedagogy, she said.

The Orthophrenic School was also a key plot point in a cascading personal melodrama: Montessori had fallen in love with her co-director, Giuseppe Montesano, and given birth in secret to their son. The child was whisked off to a wet nurse in the countryside; Montesano married another woman, and Montessori, finding proximity to her ex-lover unbearable, resigned her position at the school. In this moment, De Stefano writes, she lost “everything she had done for special education, the mission for which she had given up her son at birth.” Such a sacrifice would undoubtedly provide the tragic pivot for the Oscar-bait biopic of Montessori’s life. But it’s not entirely reflective of actual events: after she resigned, she pursued anthropological research in mainstream public schools, finished translating some six hundred pages of Séguin’s writings into Italian, and took an appointment at the University of Rome, where she gave lectures that proposed “practical foundations of a far-reaching reform in our schools.” (She was reunited with her son, Mario, when he was a teen-ager, and as an adult he became one of her closest collaborators.)

i love my family, is not that enough?